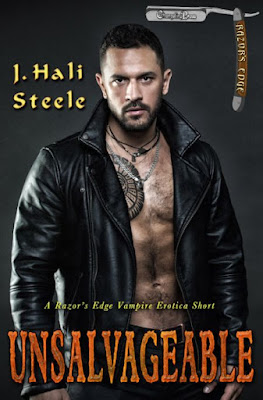 Vampires are real! Sten Majkovic has lived longer than he ever dreamed possible. Among his kind it isn’t easy having a slim, lithe build, but it does have advantages in the human world. He welcomes attention of men who appreciate his appearance. Their mistake is expecting to hold the upper hand. None ever do. And not a single one of them realizes his rabid need for blood -- until it’s too late…

Drew Riles’ life is shitty. Mid-fifties, passed over for promotion, he struggles to stay afloat until, nearly beaten to death, he’s rescued by a monster. Unsure how to survive, he flounders in unfamiliar territory. Anger soon replaces what little fear the beast allows as Drew comprehends the fiend has no intention of releasing him. Both emotions quickly evaporate as he watches the bloodthirsty creature use men in a way… God, I want to be those men!

Preorder for March 4th at these retailers:

He knows my name!

This can’t be happening. None of this is real. A nightmare brought on by the beating he’d sustained. Drew barely remembered how he’d ended up in the filthy alley, let alone wherever he was now. But he recalled watching a man commit murder by tearing another’s throat out.

Drugged. The creep from the bar must have drugged me and coerced me outside.

His watch was gone. A gift from his mother after graduating university. Feeling his neck, Drew discovered the chain missing, as well. My chain! A present from…

Should have taken time to have that clasp replaced.

He wondered how long he’d been out. Exploring the back of his head with shaky fingers, he discovered the scab he touched wasn’t painful. His nose had been broken, but it didn’t hurt when he located a bump along the bridge. Unkempt hair fell onto his forehead, his chin was covered with more than normal stubble and bristled beneath his fingertips.

How many days had he been butt ass naked in a stranger’s bed? A stranger who acted like…

“Just over a week. And the word you’re searching for is vampire.”

Drew sat up carefully, anticipated pain in his abdomen where the robber had repeatedly kicked him. Barely ached. “What?”

Faint light filtered through blinds. Not enough to make out the speaker’s features. “This will help.” A lamp came on beside the bed, but there was no sound to indicate the use of a remote, and the creature didn’t appear to have moved from his seat.

“Vampire. And just over a week.”

“It’s losing your job that concerns you?”

“Call me Sten. And your boss does not expect you back until next month.”

“Predictable timeframe for a human who has sustained injuries such as yours.”

Drew peered around in search of an escape route. “Goddamn it, what did you tell them?”

“Your office was informed you had been in an auto accident.”

“I didn’t say anything. My staff, which includes doctors, handles such problems.”

“I take it this isn’t the first time you kidnapped a battered stranger.”

“Actually, it is. Any others I allowed to live were collected and tended to.”

“No.” Lips shifted into a stern slash. “And I wouldn’t call it kidnapping. You do recall asking me to save your life?”

“I expected to wake up in a hospital.”

“Instead, you woke up in my bed, with your secret safe.”

“We’ll talk of that another time.” Sten leaned forward. “What do you really want to know, Drew?”

Sten wasn’t a big man. Nowhere near Drew’s height or weight. Impossible to be what he claimed. Those monsters are huge. Short to medium height, with walnut hued skin, he looked no older than thirty, maybe thirty-five. Slender, but if Drew had to guess, lean muscle likely covered his body. “You have short hair.” And a neatly trimmed beard. Both were inky black. God, his mouth is… What the fuck am I thinking! Senseless thoughts. “You’re short.”

“I don’t read those kinds of books.”

“Then why the preconceived ideas regarding vampire appearance?”

“I just thought, well, I expected a beast like you would be larger than life.” I watched you kill a man!

“Beast. I see.” Sten stood and walked to a window. “Evening approaches.” He twisted a rod and the blinds opened to allow fading sunlight into the space. “Does your information predict how long before I burst into flames if the sun’s rays touch me?” The man had moved fluidly past the bed, yet each step appeared measured as if a wild animal reigned in his body, ready to break free and pounce.

“I don’t…” Drew stared at expensively shod feet. They had made no noise on the highly polished wood floors gleaming under admitted sunlight. Bet those shoes cost a pretty penny. He took note of pants as black as the shirt. A perfectly tailored fit, the slacks clung to narrow hips that Drew had trouble pulling his eyes away from.

Multi-published and Amazon bestselling author of Romance in Paranormal, Fantasy, and Contemporary worlds which include ReligErotica and LGBTQ stories where humans, vampyres, shapeshifters and angels collide-they collide a lot! When J. Hali's not writing or reading, she can be found snuggled in front of the TV with a cat in her lap, and a cup of coffee.

Popular posts from this blog 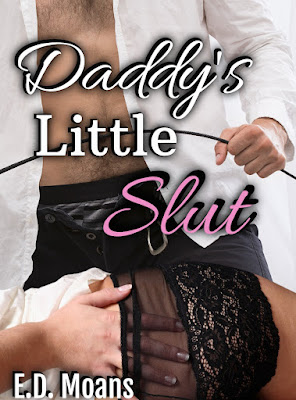 Spying on JT was wrong. Yet, I couldn't make myself stop. I wanted him. Needed him. Then he catches me... Makes me call him "Daddy." Then gives me the biggest orgasm ever. Now I'm Daddy's Little Slut, and I want more... WARNING: Daddy's Little Slut is an age-gap Daddy Dom short erotica with no plot and minimal character development. If you're looking for "romance" or a storyline, this is NOT it! Get it for $0.99 at Amazon or read for free in Kindle Unlimited SNEAK PEEK - ADULT CONTENT Copyright 2022, E.D. Moans “You’ve been a naughty girl, Sonja. Whatever shall I do with you?” JT asked, his eyebrow arched. His gaze skimmed over me and I realized my breast and pussy were both exposed. I reach for the hem of my nightie and he stopped me. “No. Don’t cover yourself.” I panted, both turned on and self-conscious. My clit pulsed with need, and I wondered if he could see how slick I’d gotten from imaging him fucking me. “How many times have you hi
Read more 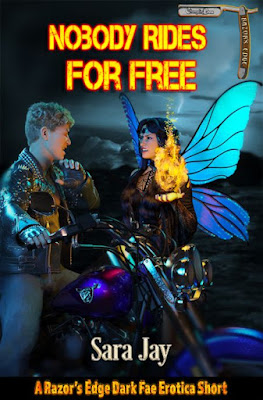 Warning: This is a Razor's Edge Monster Erotica Story. Expect limited plot and character development, and lots of paranormal heat. If you're looking for a lengthy plot driven erotic romance, this is  not  it! In a world where Fae desires overrule those of mere humans, Sinn is consumed with passion for her soulmate, Daka. Though he refuses to break the Fae law that prevents them from having sex without the queen's permission, Sinn finds a way to sate her sexual hunger -- with the assistance of three bikers. But nobody rides for free... Preorder for February 11, 2022 at Amazon About Sara Jay  Sara Jay's world is filled with fantasy creatures, mythology, supernatural romance and saucy tales. If it's smoking hot, and has fur, fangs or wings, it's Sara's thing. She enjoys reading and crafting stories that will keep you reading for steamy, sexy and fascinating reasons! Sara hails from the Midwest where she lives with her rugged husband, teenager and a house full
Read more 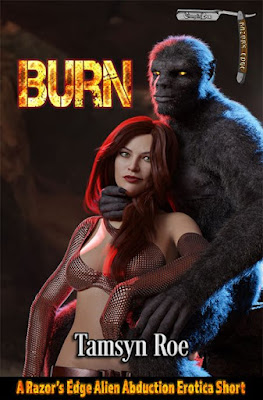 Warning: This is a Razor's Edge Alien Abduction Erotica short story. Expect limited plot and character development, and lots of paranormal heat. If you're looking for a lengthy plot driven erotic romance, this is  not  it! The only survivors of a terrible crash, two women from Earth become the unwilling guests of a tribe of aliens who've lost all their women. Will Bianca and Coreen escape the Sloth-King before he makes them the "goddesses" of his tribe, or will they embrace their slavery? Preorder at Amazon for February 11, 2022 About Tamsyn Roe  Tamsyn Roe enjoys creating short spicy stories for her readers. Tam is a nature lover who is always daydreaming. She lives in the Midwest with two cats that are 4% werewolf.
Read more