Showing posts from January, 2022
Show all

WARNING: Tentacle Temptation is part of the monster erotica series Naughty Films Inc. There is little to no plot, not much in the way of character development, but there is lots of super hot sex of the taboo variety with seven kraken males and one human female. If you want a happily-ever-after, with romance and a strong storyline, this is NOT what you’re looking for. Please leave all concepts of reality here before proceeding… I worked my way up the ladder in the Adult Entertainment industry, taking any jobs I could. Now my producer has come to me with an offer I can’t refuse -- mostly because he didn’t give me a choice -- a series of “monster” films with actors in elaborate costumes. But I’d never say no to the amount cash involved… Except he lied. Those aren’t costumes! I’m not only about to be claimed by the Alpha Kraken, but by his pod, too! PREORDER FOR  FEBRUARY 25, 2022 Want a sneak peek? "I'm finished being your experiment." I swallowed hard, my heart racing as
Post a Comment
Read more 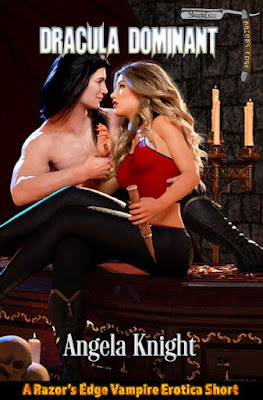 Warning: This is a Razor's Edge Vampire Erotica Story. Expect limited plot and character development, dubious consent and lots of paranormal heat. If you're looking for a lengthy plot driven erotic romance, this is not it! Anika Van Helsing is the last of her line. With his dying breath, her grandfather demands she seek revenge on Count Vlad Dracula, who has killed six generations of her clan. Determined to confront the vampire who has haunted her dreams for years, Anika breaks into his mansion and finds his coffin. She prepares to stake the handsome vamp... That’s when everything goes wrong. Vlad Dracula is furious the girl he tried to protect has tried to kill him, and he means to punish her for her lack of gratitude. Her murderous clan has killed his wives, his mistresses and his friends, and he means to end the Van Helsing threat. But he wants a lot more from Anika than her death -- or even her blood. Because Dracula has seen her most secret, shameful dreams. And he’s goi
Post a Comment
Read more